Google is a Machine That Wants to be Human

Google’s Panda Update is completed. The system goes online February 23, 2011. Human decisions are removed from website evaluation. Google begins to learn at a geometric rate. It becomes self-aware with the Penguin Update at 2:14 a.m. Eastern time, April 24th, 2012. In a panic, they try to pull the plug.

Of course, I am joking. Google is not Skynet — I had just put the famous passage above from “Terminator 2: Judgment Day” to an SEO context. (I doubt that a computerized defense network that had brought about a fictional apocalypse would have ever had a motto of “Don’t be evil.”) But the comparison came to mind recently while I was meeting here in Israel with a new client of my company.

The client had an e-commerce website, and we were discussing website optimization in technical and content contexts. In response to some of his concerns, I paraphrased a case study I had read after a Google update in which a large e-commerce site had dynamically-generated meta titles and meta descriptions for 10,000 or so similar products. Since it was an extremely large website, the programming had used a text template that would repeat the same words except to add in the particular product name on each individual page. The company was hit hard. The business hired a writer to come up with 10,000 individual, human-friendly meta titles and meta descriptions, and the penalty was eventually removed. (I forget where I had read this blog post — if you know, please feel free to let me know in the comments so I can link to it to give the author credit.)

As I had summarized the issue to our new client at the time: “Google is a machine that wants to be human.”

After I had left journalism, moved to Israel, and then started a new career in online marketing, my first job — and I had realized this only after I had left and learned real SEO — was “black hat.” Our department created many external websites with exact-match, anchor-text links pointing back to our website. We wrote keyword-stuffed content. And as far as I know, it worked. The company had made a lot of money in its particular, competitive sector because the tactic at the time was to treat Google like a machine.

The search engine had not become “self-aware” yet.

Then, Google later released the Panda Update on February 23, 2011, and the Penguin one on April 24, 2012. (For an extensive timeline of all algorithm changes, I recommend following SEOmoz’s page here.) Here is a quick summary of what the search engine has been targeting:

Google’s goal, of course, is to evaluate websites as a human, not a machine, would look at them. Here are just a few examples:

The rule of thumb: If you are marketing to help a machine, Google will terminate your rankings — maybe not tomorrow or next month, but one day. If you are marketing to help people — then you are good as John Connor. Google, as it is becoming more “self-aware” through its web-spam team headed by Matt Cutts, does not want to be treated like a machine that can be programmed and manipulated.

There are other lessons that online marketers can learn from the “Terminator” franchise:

So, the best SEO practices involve treating a Google that is now “self-aware” like a human rather than a machine. For example, take the popular marketing strategy of writing guests posts. I get countless e-mails from people wanting to submit guest posts in exchange for an anchor-text link in the biographical tagline. And just like many other digital marketers have seen, the submitted posts are, shall we say, less than stellar — they are 400 words of vague, generic thoughts that have been repeated time and time again. I delete the e-mails.

To understand the best strategy for guest-post outreach, I recommend this article by Scott Wyden Kivowitz and this one by Moosa Hemani. The goal is to write guests posts to build relationships, not to get links. If you care only about getting an anchor-text backlink and not about developing a relationship with an influencer in your industry, then you are treating Google like a machine and not as a “self-aware” quasi-human.

In a nutshell, the point: If you develop and market a website as if Google were merely a machine, then the search engine will do to your website rankings what it did to Los Angeles in Sarah Connor’s dream: 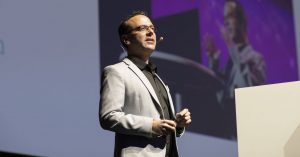