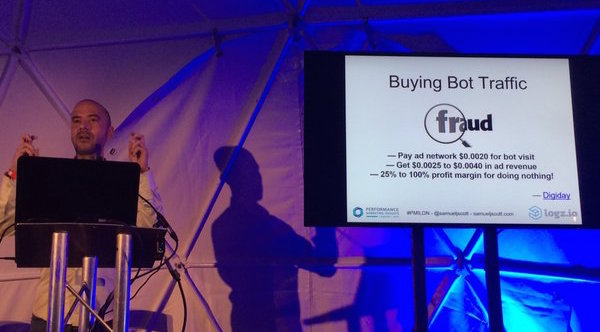 Earlier today, I gave a presentation at Performance Marketing Insights London (PMI London). Here is a summary of my talk:

If you are an advertiser who is running display ad campaigns with media buyers or ad agencies, you are getting screwed.

Reports on “impressions” largely mean nothing because most impressions are never seen by human beings. Depending on the specific study, the number of impressions that are not viewable can reach as high as 85%.

Why are so many impressions never seen? 15% of the time, a browser asks for an ad, but no ad or the wrong ad is delivered by the ad network. But because the browser made a request, an impression is still recorded.

60% of all Internet traffic is bots. Every time a bot requests a page, an impression is recorded for any ad unit on that page.

There is also a lot of publisher fraud. Publishers fit ad units into tiny 1×1 pixels so that human visitors never see them. Publishers stack ad units on top of each other so that only the one on “top” is seen. Many sites redirect visitors elsewhere to generate impressions. Publishers by bot traffic and make a good profit margin on the generated impressions.

In one estimate, only 8% of display ad impressions even have the chance to be seen by human beings.

There is a lot of kickbacks, fraud, and collision occurring in the agency and media buyer worlds, but it’s almost always reported off the record. Often, a portion of the ad spend is sent to a corporate sibling of the media buyer or agency. Sometimes media buyers and agencies bill clients for more than the cost of the ad spend — that’s called fraud.

Who’s getting screwed? The advertisers.

In the United States, $25 billion in online display ad spend is under review by major corporations. What if the same thing will happen in the UK?

Google has released ActiveView, which aims to report and charge for only viewable impressions. Facebook is working on something similar.

Overall, the IAB’s goal is for 70% viewability. But will companies accept that 30% of the ad spend will be lost from the beginning?

The ANA has launched an investigation into these practices, and the companies that the organization has hired have ex-FBI agents as employees.

In this day and age, why is anyone still running CPM online ad campaigns? It’s a waste of money. To protect yourself, stop running CPM campaigns.

A lot of the time, when people ask media buyers and agencies about the fact that roughly half of ads are not viewable, many will respond with this old advertising joke: “Half of my ad spend is wasted, and I don’t know which half.” If an agency or media buyer says that to you, fire them. Fire them right now. Either they are too stupid to know what is going on, or they think you are too stupid to know what’s going on. That joke is about which half of ads that appear are wasted. The issue here is that half or more of paid display ads do not appear in the first place.

It’s also a good idea to adjust metrics in human terms. By taking viewability into account, you can see what the cost is for a real, human impression. This can be used to adjust for click-fraud in CPC campaigns as well.

Don’t advertise in bad countries unless you have to do so. (The United States is there only for comparison purposes.)

When I see in AdBlock Plus that I’m visiting a website that is trying to load fifty scripts to track everything I do, I get pissed off. And I work in marketing. How do you think the general public feels? I’ll bet anyone here a pint of beer that five years from now, the majority of adult people in the United Kingdom will have installed some type of ad or content blocking device on their mobile devices.

And that will be our own fault — we tried to maximum short-term gain in a way that will have killed ourselves over the long term. We think so much about technology and analytics and data that we forget the most important thing — how to create good advertisements.

Here’s what I’ll leave you with. What is the most-valuable company in the world? Apple. And how did Apple become so successful? Almost through only print and TV ads.